The most popular American pocket billiard games is hands down – 8-ball.

The rules of the game are pretty simple. The first person to make all of their assigned groups (Solid or Stripes) of balls and then make the 8-ball in a designated or “called” pocket wins the game. Let’s break down some basic terminology before we move on.

We’ll go over some basic definitions so everyone is on the same page. 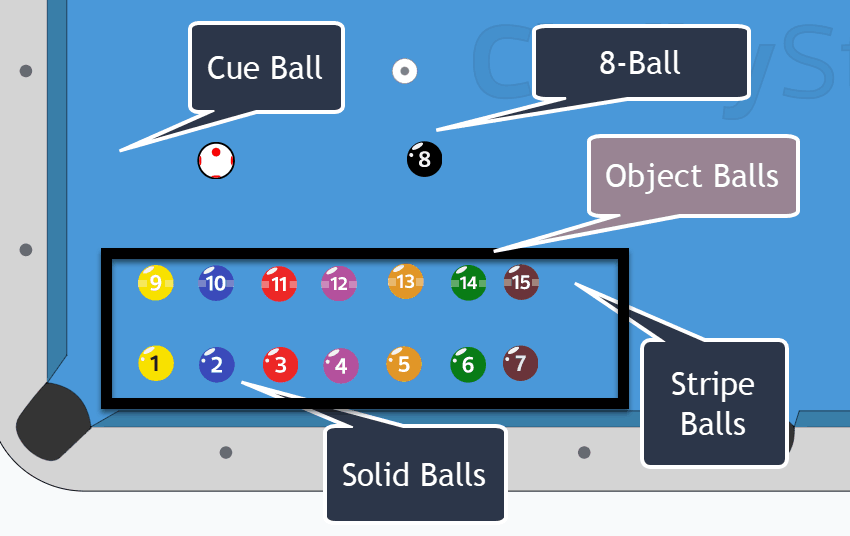 Rail = The bank or walls within the box of the pool table (think of 4 walls in a room, but called Rails)

Example: You are Solids but you accidentally hit a Stripe ball first

This is a call shot game, so you must call which ball you intend to make and the pocket it will go in. Failure to make it in the intended pocket forfeits your turn and it is now your opponent’s turn.

Most of the rules in all formats have some universal rules that are the same across the board. It may alter slightly from format to format.

The rest of the balls don’t really matter where they go.

The Foot Spot usually has a black sticker or designated marked area.

A Tight Rack – This means all the balls in the rack are touching without any space between the balls. This can also be called “Frozen”.

Be sure to make the rack “Tight” or “Frozen” which refers to each of the balls touching each other with no gaps. This ensures that the rack spreads better with energy transfer from your break is at a maximum.

The player who is breaking must break with the cue ball behind the “Head String”. This is also known as the Kitchen. Image Correction: The Head Spot is supposed to be labeled the Head String*

These are common bar rules that I have come across. The rules in your bar may be different and that’s okay too.  FYI (For your information, they may vary so please confirm with your opponent on all rules before proceeding with the game, it will save you future headaches later).

The two most popular and well-known Billiard/Pool Leagues today are APA and BCA.

APA stands for American Poolplayers Association (Largest American billiard league with over 260,000 Members) and BCA stands for Billiard Congress of America. We’ll go over some of the biggest differences between the rules for APA and BCA. I will have a link below if you want to read all the rules for either league format.

With APA and BCA being the most popular, we will go over their most popular rules, differences and similarities.

These are obviously not all the rules or differences between APA and BCA, but I wanted to go over the main ones. If you want to know the official rules for both APA and BCA, check out the links below to their official websites:

So there are some slight differences between APA and BCA. The biggest takeaway I noticed are two rules:

Bar Rules or BCA Rules appear to be fairer to most players while APA is very forgiving because “Lucky” or “Slop” shots still count. There can be an argument made that since APA is the largest league for Amateurs and players need the handicap. This is a big debate between a lot of pool players and it’s common for players to complain about.

Be sure to choose the best format and rules for you to enjoy billiards. Most of the general rules are similar but there are slight tweaks.